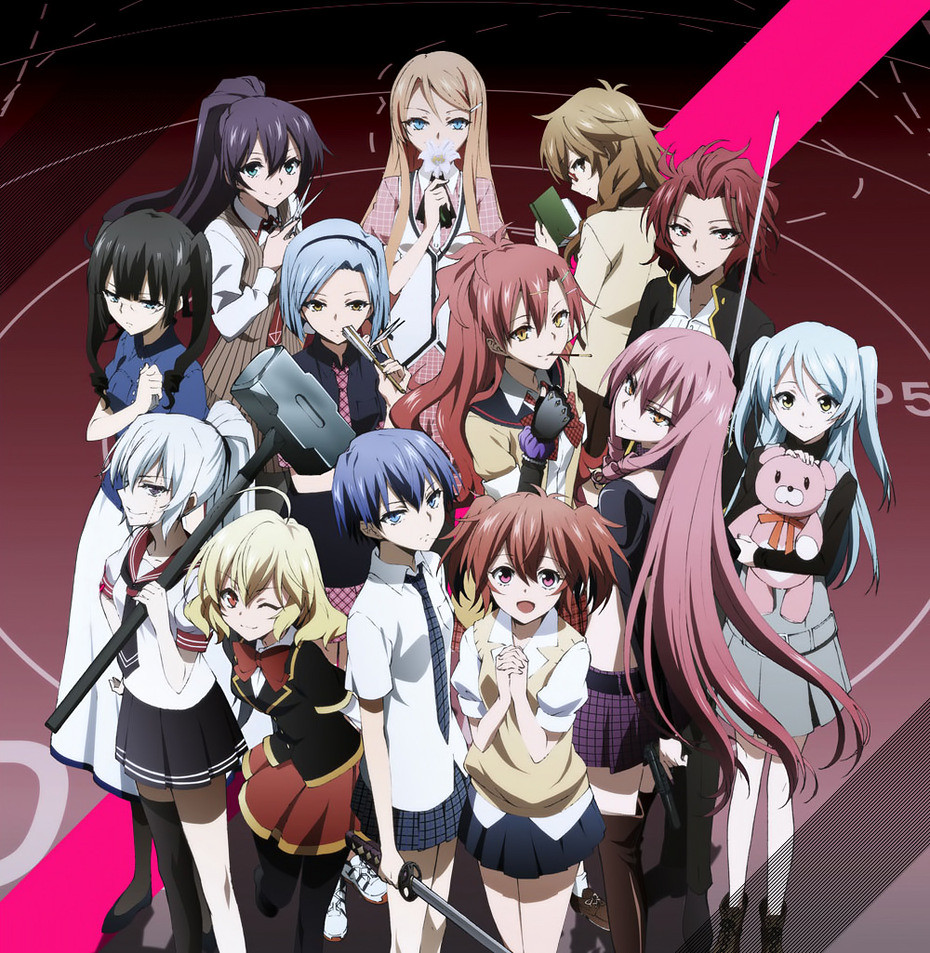 Don’t ask me for all their names, I’m not even sure. JUST ADMIRE THEM OK.

So the TL;DR of the entire series  is that Haru has this “Queen Bee” trait and the whole operation was set up by her family to test her if she can be head of the clan. This Queen Bee trait allows her to manipulate everyone. Initially Tokaku thinks she’s under the Queen Bee spell, but she isn’t (subtext: love) and she fails to kill Haru, letting Haru win who, ironically enough, just wants to live a normal life and exit the clan.

There ARE gay parents (Isuke Inukai) which I found to be entertaining as well as there were certain characters whose personalities I found to be quite attractive. Isuke was actually one of my favorites

At least until she went absolutely crazy.

And they all are. You’re sitting there, watching the show, thinking “oh she’s REALLY cute! I LIKE HER! She wouldn’t kill Haru…right??”

Nope, then they lose it, they go NUTS, and suddenly you’re sitting there taking back everything you just thought, cause MAN. They are NUTS.

WTF THOSE ARE CYBORG ARMS AND LEGS?? OMG I mean I hope she’s full cyborg like in Chob—

OH MY GOD NO SHE’S A QUADRIPALEGIC

WITH REPLACEABLE ARMS AND LEGS FOR WEAPONS.

Remember kids, don’t stick your dick in crazy (don’t stick ANYTHING in crazy. Except maybe a knife?)

I mentioned the lack of the dark premise before. I was actually expecting EVERYONE to be dead (or most), but it turns out possibly at the end they all haven’t?? I thought they all would die. I know some of their thingies expired and got expelled (like tokaku) but I thought at least MOST of them died.

The ending was a bit confusing since she’s delivering all the diploma’s to her classmates (that tried to kill her btw) so are they all alive? I’m assuming their not I mean…how would they even continue this?

The only way I can see them continuing is if season 2 as a completely different arc from season one.

As for Yuri content, heh, there’s this one “kiss scene” where Tokaku is given….CPR? (underwater?) but hell that doesn’t even count! Lots of subtext though with that princely one and the kid so, I mean unless you ship them…

It may be off to fanfiction for this one folks.

So overall, good anime, humorous, not actually that dark at all, but strictly subtext anime (THAT “KISS” DOESNT COUNT AT ALL).