Very short manga about 2 people. I was going over the list and thought “wait…I HAVEN’T reviewed Voiceful???”

Can be read on mangafox Here 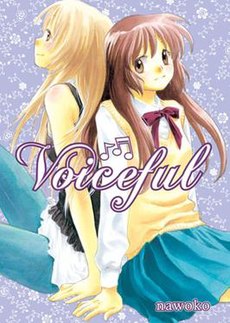 The story is about an extremely shy and introverted girl Kanae Chan, who idolizes an upcoming singer, Hina. One day after getting her hair cut similar to Hina’s, she actually runs into Hina on the street and blurts out “I love you!” to Hina! She gives Hina whatever she just bought and embarrassingly runs away back home before she can embarrass herself further (like we all would do). Hina, surprisingly, who has never been told this before is intrigued, and successfully finds Kanae-Chan AND THEY HANG OUT WITH EACH OTHER (this would never happen in real life…)

Overall, despite the um, unrealistic aspect of the story (but it’s good to dream) and it’s shortness, I really enjoyed this manga. The chapters are about 40 pages long, so it’s not that short, but it still is much shorter than a series. It is still one of my favorites, and I highly recommend it.

As for Yuri, unfortunately its almost purely subtext. I was debating even writing a review on it entirely. There is one part, but it could be easily misconstrued as something else. I do still think that as long as you pay attention to subtle details, you may walk away from it thinking its a beautiful story (much like I do).

Major points still have to be docked for Yuri content though.

The art itself is tolerable. I can tell Hina is pretty. It is also kind of simple at the same time (the eyes are quite simple) the hair and clothes are more detailed, but there are many frames that are close ups, or dont have a background. But it’s not terrible art with weird faces. So I can say they did not do a bad job.

This story is actually quite deep and soulful. My favorite parts about this manga is when we get backstory from Hina, and how she was as a child. It kind of explains how she is able to connect with Kanae, who is very introverted when we first meet her.

It was however, mostly focused on music and inspirations for music (love). We also don’t get very much backstory on Kanae, if anything she is usually used more as a mirroring device for Hina’s past, as Kanae also feels differently about her mother (it’s hinted she’s living with her step-mother). Kanae’s storyline is actually mostly hinted at as well. It’s a much more subtle approach. For example, its hinted she was the one who wrote the mean comment about the radio visit on Hina’s website.

Again though, the confession of “yes, I like you” could easily be interpreted as friendship rather then love =/ but I’ll take what I can get.

Overall, I enjoyed the story. As long as you’re one to pay attention to the more subtle parts of the story, it’s actually quite beautiful. The shortness of it is jarring though as there is no clear love profession (seriously does the last part even count?) and so major points are to be docked. Art is quite tolerable, no big issues with the art here. It does skimp on details though.