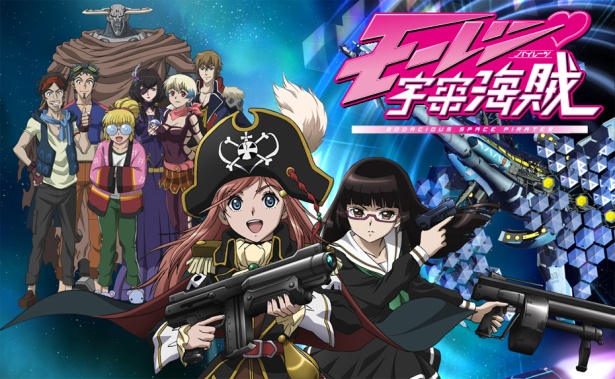 While looking for new Shoujo-ai/yuri anime, I stumbled across this little gem on Crunchyroll.

Originally a light novel, it has been adapted into an anime, and a movie is currently in production.

Upon first glance, this seemed to be no yuri at all. I mean look at the plot summary.

It takes place is in the future, where space pirates exist. In an all girls’ high school on Earth (supposedly) is Kato Marika, direct descendant of the famous space pirate, Gonzaemon, Captain of the Bentenmaru. Kato Marika is told that her father, who she has never met, has passed and the only way to keep the Bentenmaru alive is if she takes over as captain.

I know what you’re thinking “this sounds stupid.” Yes, the name is retarded (well the english one at least…) and ok, it sounds more like a slice of life plot than a Shoujo-ai. What convinced me to actually watch it though was that I read it was recommended by ANN. And you know what they say about ANN….

So, I started watching it. It is only 26 episodes long, (at least for now…) and you can watch it on Crunchyroll here .

Don’t worry, there are no possible male pairings in this one. The only one that’s good looking enough is thankfully, married.

In terms of Yuri content itself, there is not much. Most of it is subtext and implication, EXCEPT for one pairing which had no development (hints here and there) up to a point where it becomes officially canon (YAY). It won’t be hard for you to guess which one either….

Me? A Lesbian? How dare you! I clearly do not look like a typical butch lesbian…

Although also lacking in action (as in nobody ever dies or gets hurt) that doesn’t mean there was no action, there indeed was. But they’re not intense fights that leave you gripping to the edge of your seat, wondering if they’ll survive.

BUT the story line overall is light-hearted, funny and awesome.

This scene was particularly hilarious

It was well worth the 26 episodes and I quite enjoyed it, even with the lack of Shoujo-ai content.

Overall Rating: 7/10 (more detail as to why below, but contains spoilers)

THERE ARE DIRE SPOILERS PAST THIS POINT. AJSHDAKLJSHDSJDAASDSADSADA

END_OF_DOCUMENT_TOKEN_TO_BE_REPLACED

In this review, I will be going over my thoughts of the Strawberry Panic Storyline, artwork, as well as the differences in the anime and manga. The Full series fan translated to English can be found here . 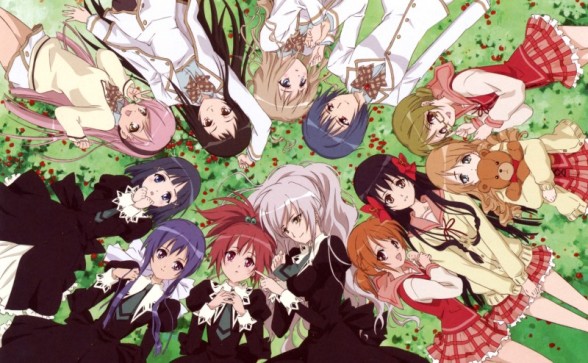 Rating: 8/10 (more details as to why below, but contains spoilers)

The manga starts out with an opening scene of Shizuma breaking a girls heart. Then reverts back to Nagisa, dressing in her school uniform, and making her way towards school, while speaking in 3rd person.

At least, that’s how the English translation is.

Note, that although I found this extremely annoying, the translator refused to translate it properly (I guess) as she speaks in 3rd person. However odd that may be, i recall plenty of Japanese people speaking like this. It is apparently normal, and is supposed to be translated to English differently.

Through out the manga, Shizuma has tried to capture Nagisa, like she has with every other girl. But Nagisa actually resists (somewhat) to her player ways! This makes Shizuma all the more determined to make Nagisa hers!

The rest of the manga is mostly focused on the etoile elections, and her ever growing closeness to Shizuma.

Overall Rating: 8/10 (more details as to why below, but contains spoilers)

Differences between Anime and Manga:

THERE ARE SPOILERS PAST THIS POINT. EERRRMMIGGAAWWWWDDDD

END_OF_DOCUMENT_TOKEN_TO_BE_REPLACED

One of the best pure yuri/shoujo ai anime’s I ever had the honour to view. I review the manga separately as it is a separate storyline. The comparison will be in the Manga review.

St. Miator, known for being graceful and intelligent.

Speaking quite frankly, they’re all cute and hot. They are also all girls school so you don’t even have to worry about boys. 🙂

I absolutely loved this anime. No boys? check. Swarm of girls i get to choose from? check. Cute pairings? Double check. Not to mention the plot aint bad.

It centres around a clumsy girl named Nagisa Aoi, a transfer student to the school. Her first day and she accidentally bumps into the mysterious, “cold” player Shizuma. Together with Nagisa, you go through her adventures of making friends, fitting in, and figuring out her feelings.

This isn’t a spoiler. This happens in the first episode.

Now, onto an in depth review.

Overall Rating: 10/10 (more details as to why below, but contains spoilers)

THERE ARE SPOILERS PAST THIS POINT. LOOK AWAY!!!! IF YOU HAVEN’T, THIS ONE WAS WELL WORTH THE WATCH SO GO WATCH IT.

END_OF_DOCUMENT_TOKEN_TO_BE_REPLACED

My all -time favourite anime!

First, I want you to know that yes, there is a manga. No I do not recommend you read it. It does not have one single spec of Yuri in that thing. The anime however, is almost no way related to the manga. The only thing they have in common are characters.

I will be reviewing all of the series and it’s sequals/prequals to it as well. This includes Mai Otome, Zwei, and 0~S.ifr~

Although the Yuri storyline is not really the main plot line, it serves as in interesting and lovable side story that you just can’t help but “awwwe”. The main characters for this are Tokiha Mai, a hard working, caring, big boobed, and suspiciously powerful girl. Natsuki Kuga, the cold, tsundere, rightfully powerful, badass, coolness oozing off of her, with occasional embarrassing moments, and odd obsessions that prove she’s human. Mikoto Minagi, a childish middle school girl with a large, mysterious sword, and powerful usage of it. I don’t want to spoil too much. I’ll get in to plot later on.

I will only recommend that for Mai-Hime.

Mai Otome takes place in the future of the Hime world, where most characters are re-incarnated in the new world, with the focus on another trio. Arika Yumemiya, Antsy because she looks like one, who has odd powerful powers cause her mom did (that’s not a spoiler, you find that out in like the second episode) a loud annoying dumbass who reminds you a lot like Naruto but with bigger boobs. Mashiro, the spoiled princess of a falling kingdom, and Nina Wang, no she’s not Chinese, but she’s quiet, cold, tsundere, and rightfully powerful cause you know, she worked for it.

Not a lot of Yuri in that. In fact it’s quite minimal to the point that….well…I’ll get into how much later but I mean there’s only really subtext and not a whole lot of that, might I add. There’s only about 3 minutes of reciprocated Yuri that is subtext. The rest is about 5 minutes of something that was un-reciprocated yuri that you wished never happened (Trust me on this one).

Legit, i can’t remember who these people are…

Mai Otome Zwei is the OVA and 0~S.ifr~ is a pre-qual to Mai Otome (but still after Hime) and focus mostly on the mother of of Antsy—I mean Arika. Honestly, I can’t remember a lot of what actually happened. I personally didn’t feel like this deserved a rewatch on my part, but to each and their own.

It wasn’t bad, per se, but as for Yuri content, well there’s a whole lot more if that’s what you’re asking. Mostly one-sided but comical. I think there’s one pairing in this that isn’t and hints of an ex-pairing. Not much but I honestly just didn’t care much for this.

Overall Rating: 8/10 (more details as to why below, but contains spoilers)

THERE ARE SPOILERS PAST THIS POINT. IF YOU HAVE NOT WATCHED IT YET, WTF ARE YOU DOING, CLOSE THIS AND GO FREAKIN WATCH IT.

END_OF_DOCUMENT_TOKEN_TO_BE_REPLACED

This will be my first blog ever! It’s finally reached that point where I have seen enough, and red enough yuri/shoujo ai to pass down that knowledge to you.

Not only will be trying to keep up to date with new Anime/manga, I will also be reviewing old ones! I can’t wait!

Also, feel free to recommend some to me as I’m sure I haven’t read everything just yet.

For inquiries about my blog, you can contact me at